WesternZagros invested in a large, previously unexplored block in the Garmian region in the southeast of the Kurdistan Region of Iraq. Initial surface mapping had shown several exploration prospects.

WesternZagros began speculative survey work in 2005 and signed the first Exploration and Production Sharing Contract with the KRG in 2006. The company conducted its first large seismic survey in 2007, and began drilling its first well, Sarqala-1, in 2008. The complex geology, which includes stacked reservoirs and high formation pressures, made for technically challenging drilling. However, the first four exploration wells between 2008 and 2012 all yielded discoveries.

As well as a high-quality light-oil field at Sarqala, a giant oil and gas field was also discovered at Kurdamir. The Kurdamir-1 well, drilled in November 2009 discovered a large natural gas and condensate accumulation. Subsequent drilling proved the presence of significant oil below the gas, the full extent of which has yet to be delineated.

The forerunner of  WesternZagros was formed in 2004 as a wholly owned subsidiary of Canadian publicly traded company Western Oil Sands Inc., and spun off as an independent public company in 2007. WesternZagros traded on the TSX Venture Exchange in Canada for 10 years.

In 2017, a group of investors made a successful offer to the shareholders of WesternZagros Resources Ltd to buy the outstanding shares and today the company is restructured and privately owned.  WesternZagros has raised substantial capital to fund its exploration and development activities. By the close of 2020, WesternZagros has invested over US$500 million in the Kurdistan Region of Iraq.

The management team have long histories with the company. Three members of the executive team, CEO Simon Hatfield, CFO Tony Kraljic and MD Exploration Ke Lovan, have been with the company since the Western Oil Sands days.

When WesternZagros began working in the Kurdistan Region, Garmian was a relatively impoverished and underdeveloped area. There was little modern infrastructure, let alone a skilled local workforce. The local community welcomed the company’s arrival and the prospect of economic development in this neglected region.

WesternZagros operated the entire exploration block and made the original discoveries. In 2008, the Kurdistan Regional Government awarded a 40 per cent share in the Block to Talisman Energy, another Canadian company. Following the Kurdamir discovery, in 2011, the Kurdistan Regional Government divided the block into two, calling the new blocks Garmian and Kurdamir. Talisman became operator of the Kurdamir Block and relinquished its position in the Garmian block. Gazprom Neft, a large Russian company, acquired the 40 per cent relinquished share in Garmian, and subsequently became development operator.

Late in 2013, WesternZagros transferred its attention from exploration to developing its large discoveries. The Kurdistan Regional Government approved a declaration of commerciality for the Sarqala discovery at the beginning of 2014, enabling production to expand beyond the original 5,000 barrels of oil per day.

Exiting Q1 2021, production from Sarqala has exceeded 30,000 barrels per day. The oil is light and sweet, with no hydrogen sulphide, making it a good feedstock for refineries and for blending with other crudes from the Kurdistan Region for export. By the end of 2020, the field had produced over 34 million barrels of high-quality oil.

The lack of pipelines and processing infrastructure in the Garmian area creates a challenge for getting production to market. Production is trucked to the nearest pipeline entry point at Khurmala (the northern part of the Kirkuk field).  Sustained production from the much larger Kurdamir discovery will require a significant investment in processing and pipeline infrastructure. 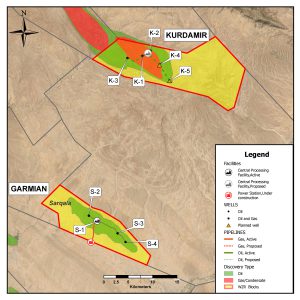